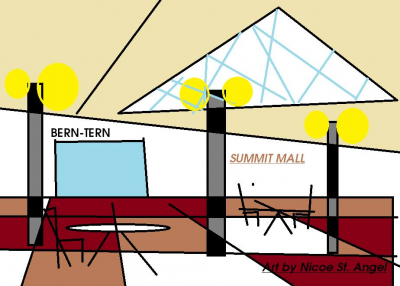 Malls are awesome. For me, it’s not so much the shopping, it’s just the experience. Malls feel like a bygone era. They’re so 80s. They feel so old school.

I grew up in an era of dying malls. I got to see two malls collapse upon themselves (three if you count the Rainbow Centre, which was gone before I was 5). The Prime Outlets was down to a popcorn stand and bathrooms by the time I stopped going to it 10 years ago. Now it’s expanded into a powerhouse in the area: the Fashion Outlets of Niagara Falls, USA.

The Summit Park Mall was not as lucky. It wasn’t even a mall by the time it was shuttered in 2009.

I’m stubborn, though, so I’ve been waiting for it to open back up in any semblance…and I might just get lucky.

In 2014, Zoran Cocov threw a chunk of money at some people to buy the property. Of course, it had be vandalized something brutal. Still, I was bouncing off the walls when it was announced they were going to open a sports dome on the property.

I don’t even like sports, and I would never use the dome. What interested me was the fact that the plans labeled the “existing mall concourse” to be opened. I was elated!

Of course, here we are in April, right when it was said construction would begin, and nothing is happening. The plan is stalling: the Town of Wheatfield is getting concerns over light and noise pollution from the dome, and the company is bashing its head against the graffiti’d walls of the dead mall.

I’m hoping that this doesn’t turn into another failed project, like what has happened around here my entire life. I pray that this project goes ahead.

I literally dream of it.

I’m not exaggerating: I dream about this old mall. It was my childhood: it was life.

So, let’s hope for my sanity that this dead mall opens.