The Perks of Being a Cartoon Sheep

Posted in: About Me 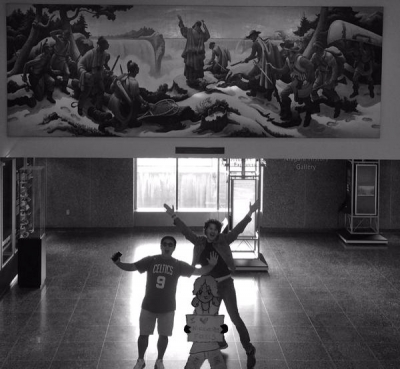 Just an opening word: You are reading a blog post on a college radio station written by a cartoon sheep.

Yes, you read that right. I'm a cartoon sheep. Let me explain.
My name is Sierra "Sheepie" McAllister. You can friend me on Facebook (which I never use) or follow me on Twitter @sheepieniagara (which I use a bit more). If you ever wanted to know how hard it is to find a shoe in size "hoof," or see someone geek out over breakfasts, you should totally follow my Twitter feed.
It's been just about a year since I became the mascot for Niagara 1/24 on WNIA. My first appearance was just me in a Rainbow Centre sweatshirt and a ponytail.

Zoom to present day. I have a very tiny following of cluster friends, have had fan art drawn of me (thanks, Katie), inspired a holiday (Schaffest), and almost ran for president. Heck, I was tweeted at by the viral hit Totes McGoats. My tweet even made it in Seventeen magazine! I'm also the most popular person on Niagara 1/24, which is funny since I've never actually been on it (cartoon sheep + radio = poor ratings).

So yeah, there are perks to being a cartoon sheep. :)