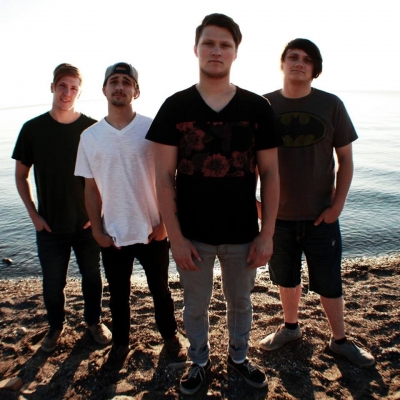 I remember the first time that I saw them live in concert. They were playing a battle of the bands competition at Immaculata Academy, and they had these cool blue backdrops and some slick-looking light up boxes to stand on. Before they even played a single note of their music, I was looking at these guys and knew they were going to be something to remember. Four years later, I still stand by that sentiment, and believe that they deserve some serious recognition for their efforts, and, ultimately, their music. Ladies and gentlemen, I present to you the local band, Rescue Dawn.

Rescue Dawn is a pop-punk band that features the band members RJ DeMarco (lead vocals/Guitar), Jonah Wrest (guitar), Tommy Balbierz (bass/vocals), and Tanner DeMarco (drums). Originally formed well before the release of their first EP, Love and Other Short Stories, RJ is the original founding member of the band, and he certainly picked the right group of guys to surround himself with. This band features a sound that rivals and resembles bands like All Time Low, My Chemical Romance, and Fallout Boy, and they do it in a fresh way that captures the audience’s attention.

Let’s start with Love and Other Short Stories, which was the brainchild of RJ DeMarco back in 2012 and it features the popular hits on their setlist, "Hearing Echoes," "The Difference Between You and Me," and "Hello, My Name Is." "Hearing Echoes" has always been a crowd favorite for this band to play, as it gets everyone involved in the fun. The choral “whoas" that come from the crowd and the band in sync makes for some serious fun every show.

Their second big release was their full length album in 2014, titled Transitions, and it was a very fresh take on the pop-punk genre. Though it features a couple typical sounding pop-punk songs (which are still just as fun to listen to) every song on this album sounds very original. The standout songs on this album are a very distinct sound that only points to this band as the creator. Many times, it is very difficult to distinguish a band in this genre, but Rescue Dawn has developed a sound that is all their own.

On their full length album, every song is fantastic, and it is very tough to pick out standouts because of how great they all are. If I had to pick, I would say that standout tracks from Transitions are "Cardinals," "Let You Down," and "On a Scale of 1-10, You’re a 3 in Personality." "Cardinals" is a punk-infused emotional song that will both get your head banging to the beat and crying at the same time as RJ belts out the lyrics to the song he says is about his passed grandfather. "Let You Down" is a ballad that will get everyone singing along by the second time they hear it. The lyrics and heart put into that song always tug right on the heart strings. "On a Scale…" is more of a typical punk song, but the pacing of it is unique. Usually a song that involves hating an ex-lover is fast-paced or angry, but in this song you can hear RJ’s remorse and pain he feels from the experience the song speaks of.

There is not a show I have been to with these guys that I haven’t been entertained by. They always put on a stellar show, and are some of the nicest guys on the planet. After their set, they always want people to stop by and meet them, and you will learn very quickly how genuine and amazing these guys are to their fans.

Give them a listen, give them a like, and go see one of their shows. You won’t regret a single second of it.