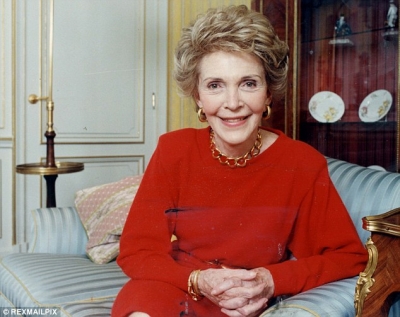 On March 6, Nancy Reagan joined her husband, Ronald, in their side-by-side grave sites at the Reagan Library. Nancy and Ronald were two film actors that played out their lives beyond Hollywood and onto the world stage as the 40th President and First Lady of the United States, respectively, from 1981 to 1989.

Nancy Reagan was born in New York City, but she lived in Maryland for a long time with her aunt and uncle after her parents separated. She moved to Chicago in 1929 when her mother remarried. She took on the name Nancy Davis from her stepfather. Nancy went on with this name as a fantastic Hollywood actress in the 40s and 50s. She starred in films such as The Next Voice You Hear and Donovan’s Brain.

In 1952, Nancy married Ronald Reagan, and they had two children. When Ronald became Governor of California from 1967 to 1975, she was the First Lady. A few years later, Ronald won the 1980 presidential election, making Nancy the First Lady of the United States in January 1981.

During the Reagans’ time in the White House, Nancy founded the “Just Say No” drug awareness campaign. The campaign was meant to discourage the use of drugs as part of the U.S. “War on Drugs.” Her efforts caused a decrease of drug usage in the 1980s. According to a study conducted by the University of Michigan, cannabis usage dropped from 50.1 percent to 36 percent over the course of 10 years. The same type of decrease happened with cocaine, heroin, and other psychedelic drugs.

The Reagans retired to their home in Los Angeles, Calif., in 1989. Nancy’s main focus at this time was taking care of Ronald, who was diagnosed with Alzheimer’s disease, until his death in 2004. Nancy then shifted her focus to the Reagan Library and the support of embryonic stem cell research, until her death.

There is a lot to learn from Nancy Reagan. As she once said, “I am a big believer that eventually everything comes back to you. You get back what you give out.”

Never forget the wisdom and leadership that helped send America in the right direction.