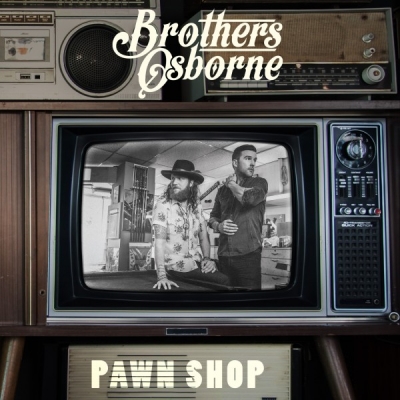 The debut album, Pawn Shop, by the Brothers Osborne (made up of brothers TJ and John Osborne) has been waiting to come out for a very long time. After releasing the lead off single, “Rum,” back in early 2014 (which subsequently stalled at No. 27 on the Billboard Country Airplay Chart), it was evident that the band stuck out with their unique fusion of country, rock, and blues. In fact, the duo may have stuck out a little TOO much, as they didn't really take off until producer Jay Joyce tried his hand at producing the duo's music. With that, a song called “Stay A Little Longer” from their 2014 self-titled EP was released with a new recording and viola, the brothers managed to score their first top five on the Billboard Country Airplay Chart, and the album is finally here. As a fan of “Stay A Little Longer," you can bet that I was excited to check out the album, Pawn Shop. So how did it turn out?

Well, pretty good for the most part! While Pawn Shop didn't live up to my expectations quite like I had hoped it would, there's still a ton of great songs on here that show a band at least trying to differentiate themselves from their contemporaries in the mainstream. With TJ Osborne's thick baritone, and John Osborne's excellent guitar play, there's a lot to enjoy on this album.

The lead single of “Stay A Little Longer” is one of the highlights on this album, especially when we get to John Osborne's explosive three minute guitar solo at the end which alone makes it way better than the radio edit version of this song. “21 Summer” is one of the few spots on this album where the brothers drift away from their country/rock/blues mixture to mold a song that is almost country-pop in nature, giving it a very spacey atmosphere. Surprisingly, it works pretty well. With “21 Summer”, we have a man reminiscing on an old summer romance he once had. As he thinks back to old times, he says to himself that he hopes his lover was able to chase down her dreams like she had always wanted, as well as how he'd go through the heartbreak of losing her again if it meant he could have her back, even for just a day. There's an honest sense of maturity present here that is accentuated by a strong melody. The title track is another particular standout with it's heavy acoustic blues production and quirky theme of strange out of date items you'd find at a pawn shop like DVD's, VHS Tapes, and Nintendo Games. “Greener Pastures” is an ode to saying “screw it” to life and packing everything up and “moving on to greener pastures”. The throwback rockabilly sound here is what really sells this particular song. And last but not least, “Loving Me Back” is arguably the album's best track, centering around a man who's looked for love in a bottle, as well as out on the road playing music for strangers. As he puts it, neither one of the two have treated him kind, which is why he's glad he's finally found a woman to settle down (“I've finally something worth loving that's loving me back”).

Of course, as much as the brothers get it right on their debut album, there are also spots where the album feels compromised, containing songs that feel like nothing more than radio filler. The lead single, “Rum” is an example of this. Sure, it has an interesting production to it, but at its core it's nothing more than just a bland beach tune. “American Crazy” feels like a bunch of cliches strung together to form a song essentially about nothing. “Dirt Rich” is essentially Zac Brown Band's “Homegrown” from last year only without the lively production that song had.

Overall, Pawn Shop is an album that definitely gets a lot more right than wrong. The only spots where the album falters is when it tries to appeal to a more mainstream friendly sound, and really, they're still better moments than a lot of songs out there. It won't blow you away, but it's still a highly enjoyable record that I definitely recommend checking out, especially since I think this will be a duo who will craft some dynamite followups.