Posted in: Rock and Roll 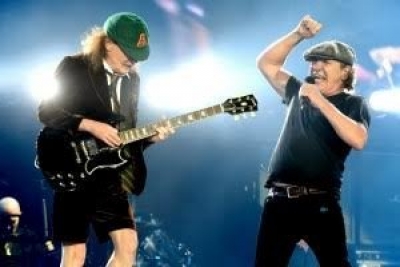 AC/DC fans were heartbroken to hear that frontman Brian Johnson dropped out mid-tour to prevent him from “complete hearing loss” last month. At that time, the band’s website simply stated the remaining 10 shows on the Rock or Bust Tour will be rescheduled. Recently, the band’s rep released a statement saying that the shows will be made up with a fill-in vocalist, confirming that Johnson has retired from touring.

No official word on who the vocalist has been released, but rumors that Axl Rose of Guns N' Roses, who just announced a nationwide reunion tour, would replace Johnson quickly spread. Founding guitarist Malcolm Young’s son then shared a Facebook post that was quickly deleted after the attention it got, congratulating Rose on getting the highly regarded spot. This was further confirmed by last week’s TMZ photos of Rose outside a studio in Atlanta, Georgia, with the remaining members of AC/DC for rehearsals. Rose was even wearing a Back In Black hat, but no word from either Rose or AC/DC’s reps confirming that he is taking over.

Currently, there are only two original members left in AC/DC: guitarist Angus Young and bassist Cliff Williams. Original lead singer Bon Scott died from alcohol poisoning in 1980 then Johnson took over, writing Back in Black in his honor, which is to this day the second-best selling album in history. Since then, the band has released 15 studio albums, the latest being Rock or Bust (2014), and have sold over 200 million records worldwide. Malcolm Young left the band in 2014 due to an out-of-the-blue dementia diagnosis. It was later revealed that his health issues were kept quiet long before the official announcement, which is raising some questions as to whether Johnson’s hearing issue was kept under wraps as well.

With no statements from either parties, the future of AC/DC seems to be on the rocks. Fans seem to be divided: either supporting Rose/the future replacement or angry for Johnson. Especially with the GNR reunion tour, it will be interesting to see who people will spend their money on. If Rose is indeed fronting AC/DC, will people still go to see GNR, whose ticket prices are averaging around $800 to $1,000? How much money will AC/DC lose from fans returning their tickets for full point of purchase if they refuse to see an non-Johnson fronted group?

Fans of both GNR and AC/DC are chomping at the bit for the official announcement confirming what seems to have already played out. The answer does not seem to be coming soon since AC/DC has not officially rescheduled the missed dates. For both bands sake, the statement should come sooner rather than later in order to avoid speculation that Johnson was forced out against his will.